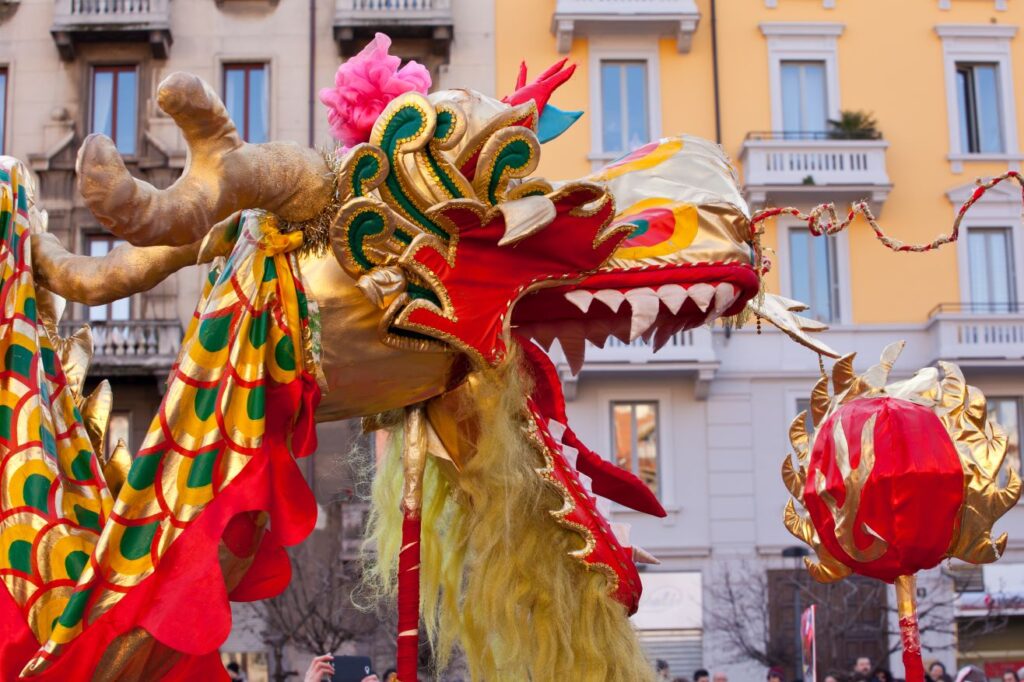 The Chinese dragon dance (舞龍; wǔ lóng) is a traditional dance that can be tracked to ancient times. It’s always present at Chinese New Year parades and other festive celebrations. In fact, it is the cherry on top of the celebration.

It’s appeal comes not only from the large dancing dragon figure but also from everything else that surrounds it: musicians, lion dance dancers, acrobats, martial arts performers, lanterns, balloons… No doubt it’s a must see!

The dragon dance is performed in China and all the Chinatowns around the world for Chinese New Year’s celebrations, also known as Spring Festival, and other festivals. In fact, the dragon dance has become a symbol of the Chinese culture.

In the Chinese culture, the dragon represents qualities like wisdom, power, wealth, and it is also linked to good luck or good fortune.

Linked to the last is the belief that having the dragon dance during the festival of New Year scares away the evil spirits for the upcoming year. So, apart from being a cultural symbol, it also represents Chinese religious beliefs.

How is the dragon dance performed?

The dancers move a long and flexible dragon figure using poles along this kind of giant puppet. Placed at regular distances from each other, they create the undulating and winding movements of the dragon, as if it went along a river.

The performance starts when a man holding a balloon fixed to a pole places himself in front of the dragon’s head. That is the the 龙珠 (lóngzhū) or “dragon ball” (yes 😉 ), that represents the “pearl of wisdom”. This first dancer starts to swing the pearl from side to side in tune to the music and the drums. The dragon is continually moving chasing the pearl, the longzhu, trying to catch it without success.

The looks of the dragon

The size and length of the dragon may vary depending on the number of dancers. Usually, there are 9, and some may carry two poles. The belief is that the longer the dragon, the better the luck the following year.

Colors also vary; the dragon doesn’t have to be of a certain color, although usually, red, yellow/gold or green (which grants a great harvest) are the most frequent. The shape of the body is like a cylinder. In the past it was made of bamboo filaments, now lighter materials are used. Then it is decorated with different props to create the patterns of the dragon and its unique looks.

If you haven’t seen a dragon dance yet, you may have seen it in movies, Chinese or Hollywood’s. If not, here’s a video of a dragon dance that took place in London, during a Chinese New Year festival.

And if you want to explore more of the Chinese culture, there’s no better way than learning Chinese! At Hanyu Chinese School we know that learning Chinese opens many doors of opportunities.

That’s why we developed different courses that can be tailored to your needs and circumstances. Contact us, we’ll be happy to clear your doubts and don’t forget to ask for your free lesson!